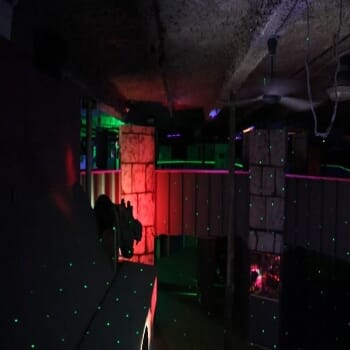 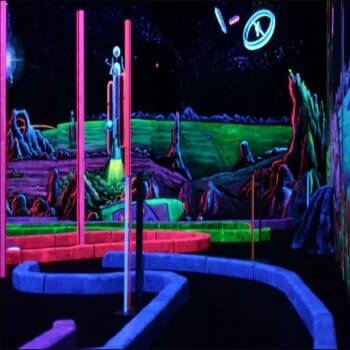 Share this deal:
Please have credit card info ready. Your order is not guaranteed until you complete checkout process.

A $56 voucher for $25
*Not valid for group/birthday parties.
*Not valid on Holidays or school vacations.

In 2008, Lazer Gate debuted Gate Golf, a blacklight mini golf course like no other that is fun for all ages and skill levels. Accompanying that expansion we also nearly doubled our arcade while introducing redemption games, a redemption counter filled with prizes, and the Cygnus 18 Cafe, an expanded snackbar. We introduced hot food items such as french fries, chicken tenders and chicken nuggets. With this expansion we became able to package both food and games for a value that no other center can match. We also expanded our party rooms to a total of four.

In 2010, we upgraded our laser tag equipment to Zone Laser Tag’s Nexus PRO system. Zone’s flagship system allows us to field up to 42 players on up to eight different teams, run more than 40 different game types, all with the lightest and most versatile equipment on the market.

Next we upgraded our multi-level 7500 sq ft arena to be interactive, introducing Mines to return fire. Then we did it again, adding 16 targets to allow a completely new level of gameplay for small games as well as features such as power ups and bonuses for every type of game.

In 2013, Lazer Gate opened the Laser Trap, a laser maze which lets players run a gauntlet of laser beams for the best score including a special 2 player mode that allows 2 players to race each other for the best time!

Lazer Gate brought back Zone Laser Tag to install their flagship system: Helios Pro. With this upgrade Lazer Gate’s laser tag arena, already the largest in the area, became even more interactive with the addition of Pick Up Pads, allowing even more variety to a huge list of games.

Our phasers now include touch screens to allow in game menus for team scores, individual stats, and bonus item selections!